Continuing on from the previous Origin Story post, now that I had the character designs it was time to give them a place to live…

Because Morgan was a kid stranded on an alien planet, I wanted his house to be a crashed ship. I didn’t have a name for the show yet, so it didn’t necessarily need to be a rocket ship… but funnily enough, that was the very first design I drew (top left in the image below… next to the Transformer’s “Ark” rip-off). Even though I knew straight away I liked the upside-down, stereotypical rocket, I continued to explore ideas just in case something better presented itself. 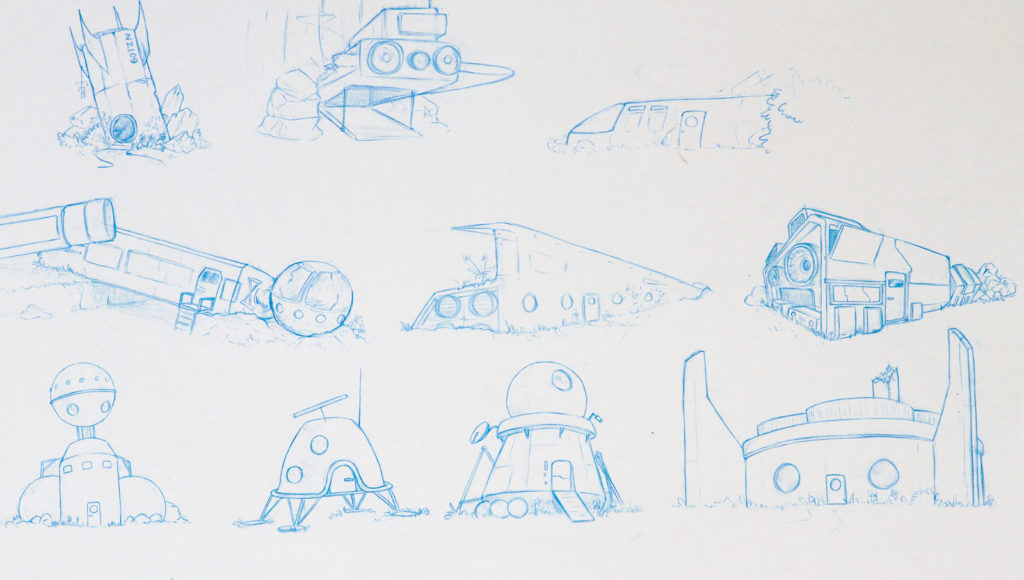 As a side note: the little capsule on the bottom (bottom row, second from left) is a direct rip from an old (even at the time) activities book I had as a kid called What Can I Do Today? (check out the cover on that page). It was  pretty rad. 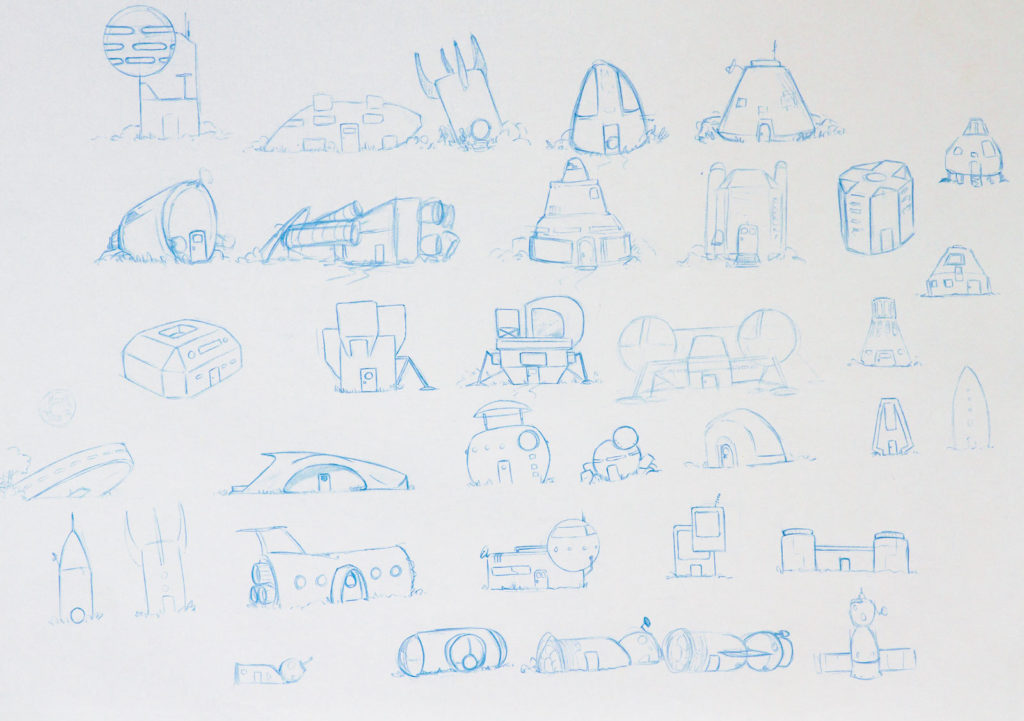 I explored lots of different styles and shapes. One shape I grew fond of was one inspired by the Soyuz spacecraft (I think I had recently re-watched Gravity around this time).

But nah, the rocket won out. I drew a sheet of upside-down rockets to try out different shapes and details. 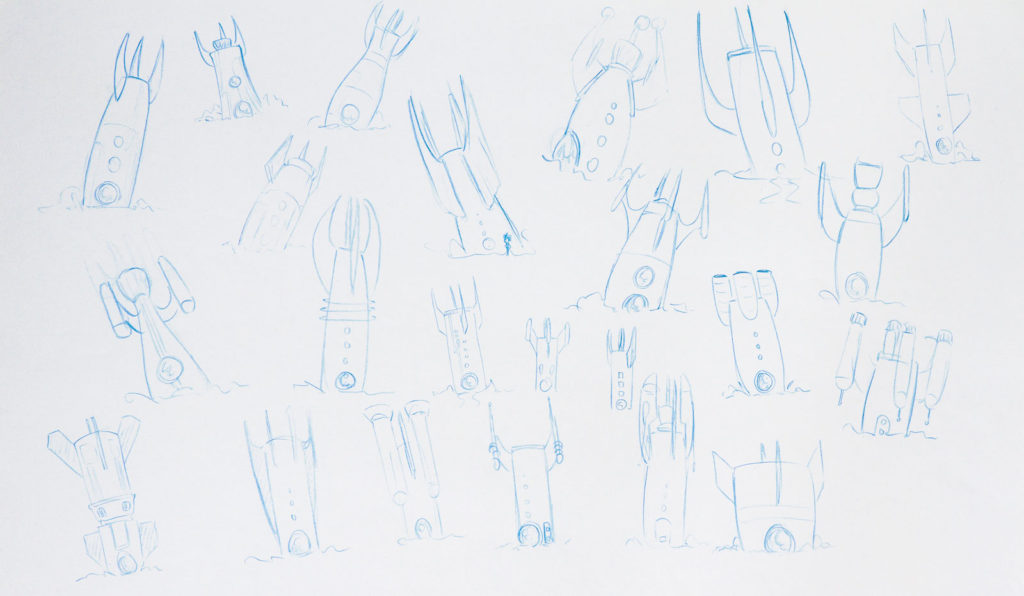 And ended up with this… a sort of ’50s retro looking rocket. Not sure if it’s super obvious, but the rocks around the bottom are meant to be from the impact of the crash. 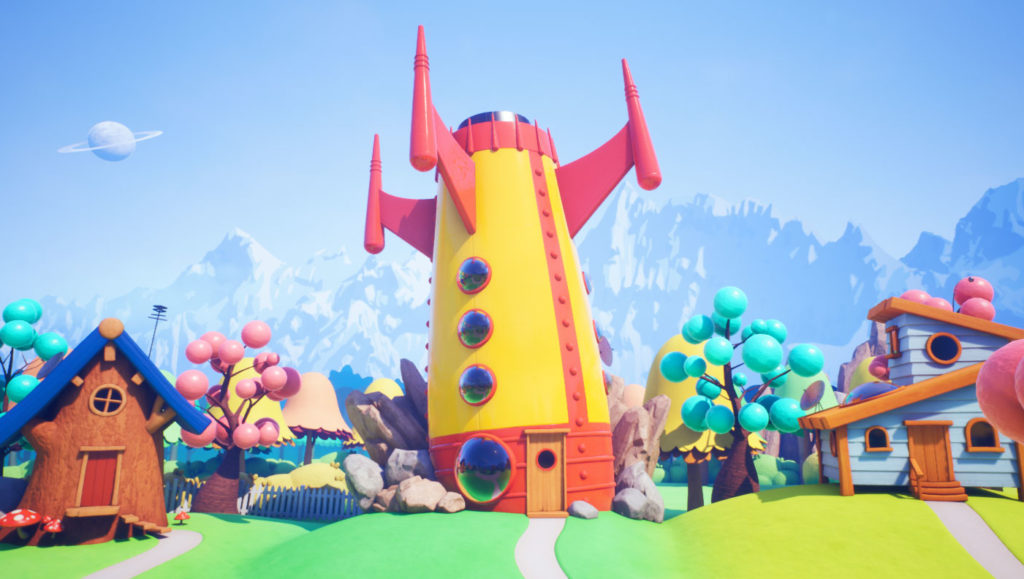 This was the most challenging house. I had no idea what I wanted going in, so just doodled around, trying to come up with something a space bear might live in. I started off exploring rock and tree type houses with sci-fi visual cues.

I also tried out shapes inspired by Māori architecture. 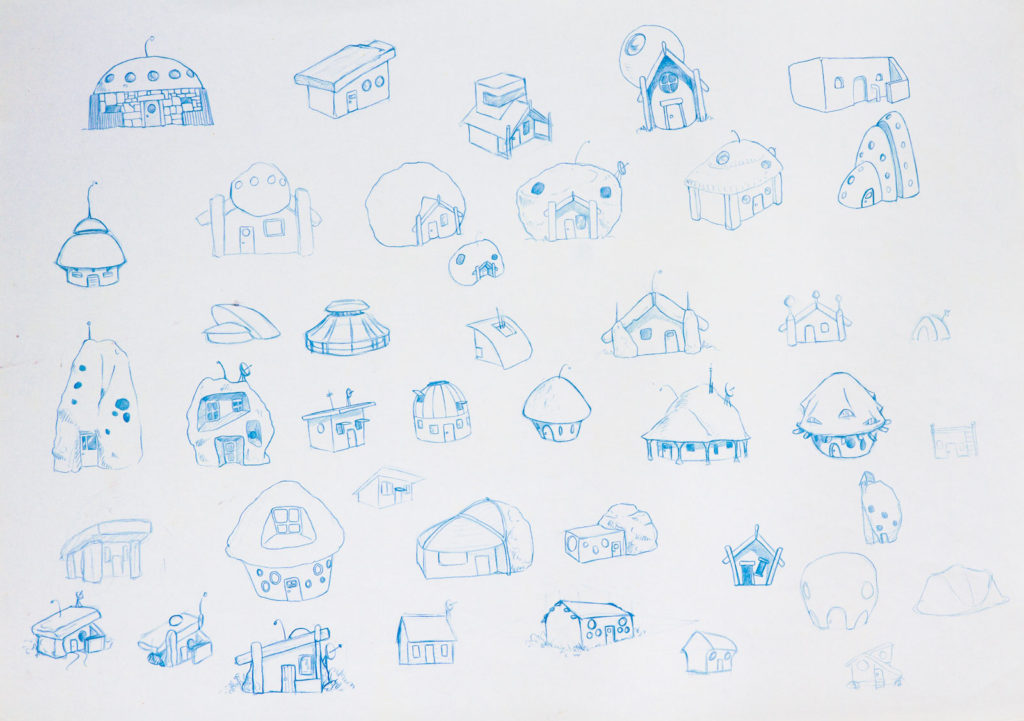 Still not really liking anything, so kept going… 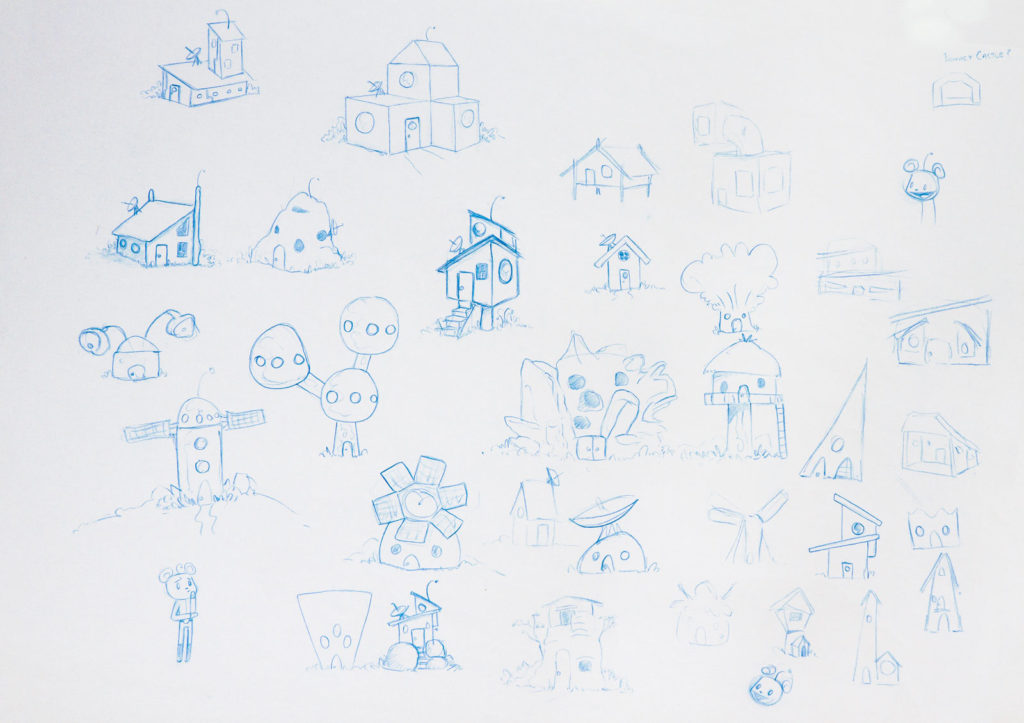 I quite liked the idea of a tree house, but realised having characters climbing up and down a ladder every time they wanted to go into his house would become problematic. With that in mind I tried out houses on little stilts. I felt that gave the house an impermanent, playful feeling similar to that of a tree house. 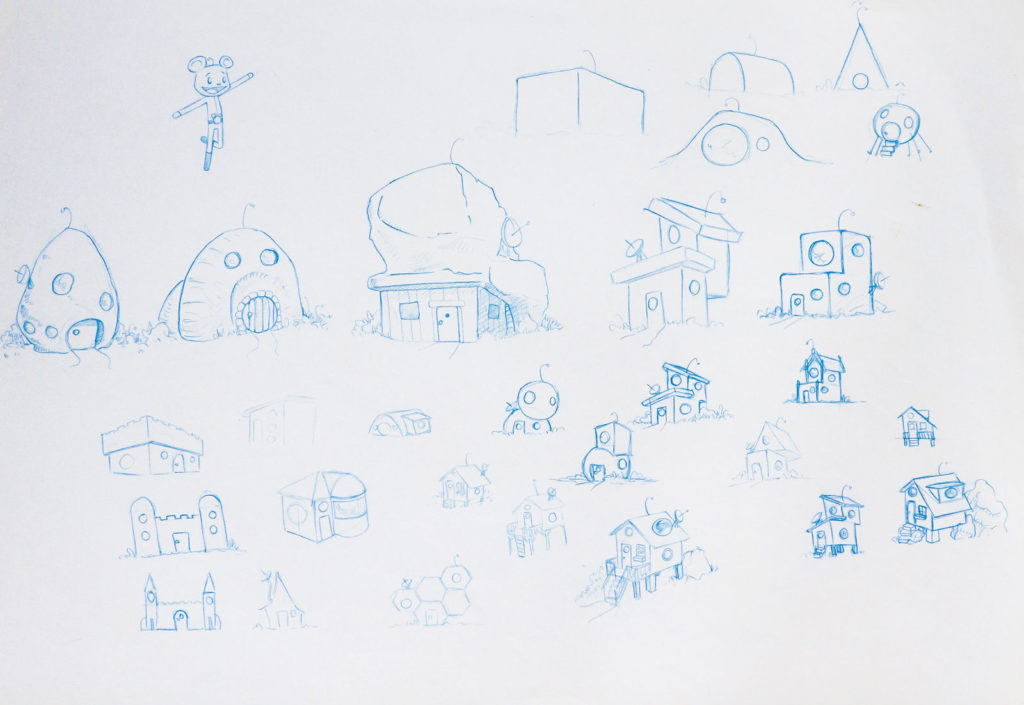 So I ended up with this, which is a bit like an old house by the beach; what we in New Zealand would call a ‘bach’. I think it’s a fun little house but to be perfectly honest I’m not entirely happy with it. I don’t think it properly represents Elliot’s personality. I think it’s lacking a ‘cheekiness’ that would better symbolize Elliot. 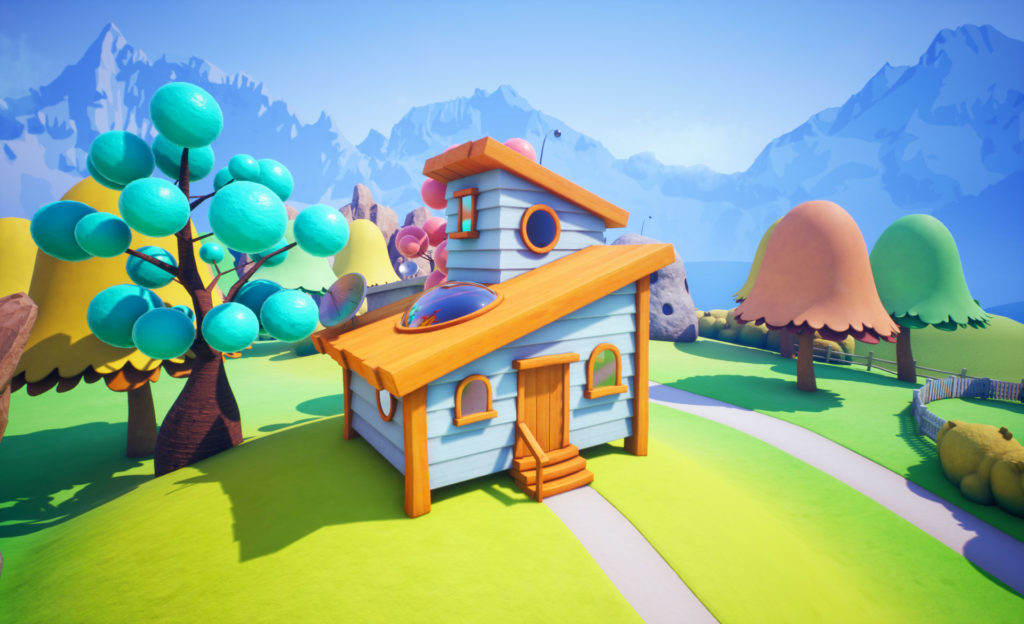 About half way through failing to find Elliot’s house, I took a break to design the other houses. And it was super easy! I just drew them on this one page and knew right away they were what I wanted. Granted they are all in some way derived from designs I had previously explored, but I was still happy with how quickly I decided on what I liked. Note the extra Elliot house on this page. I thought I was on a roll so tried to sneak an Elliot house on there to see if it would instantly work like the others… it didn’t. 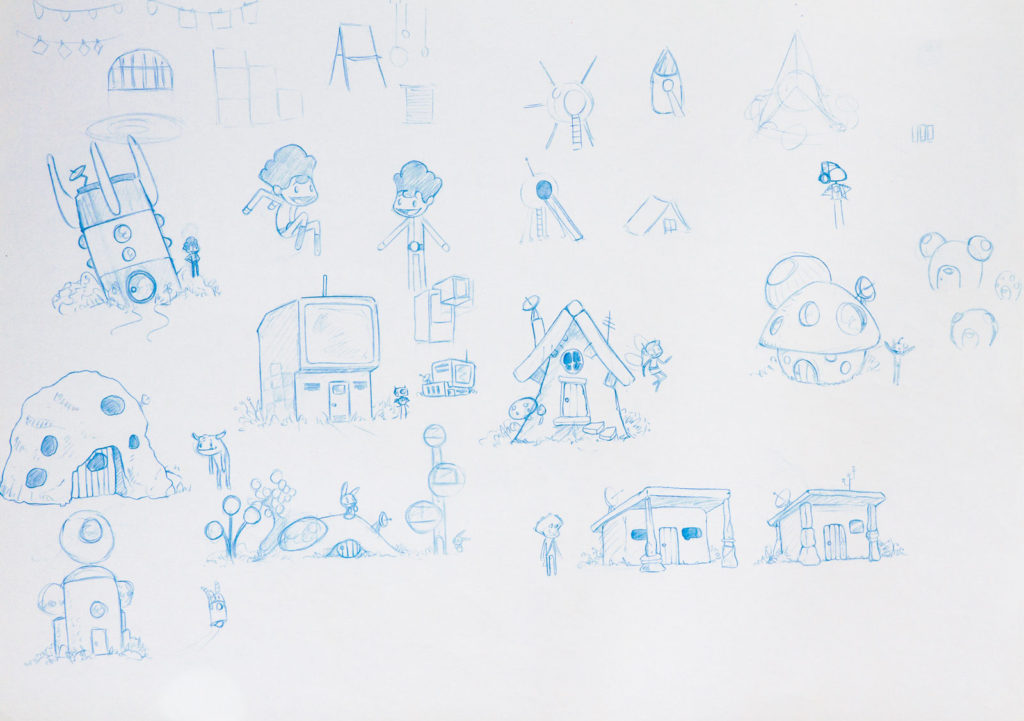 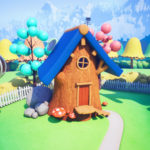 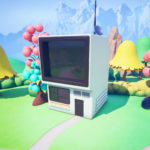 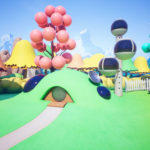 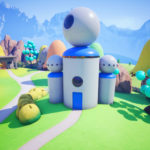 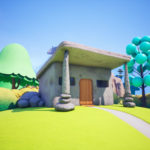 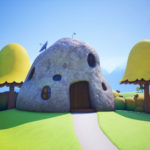