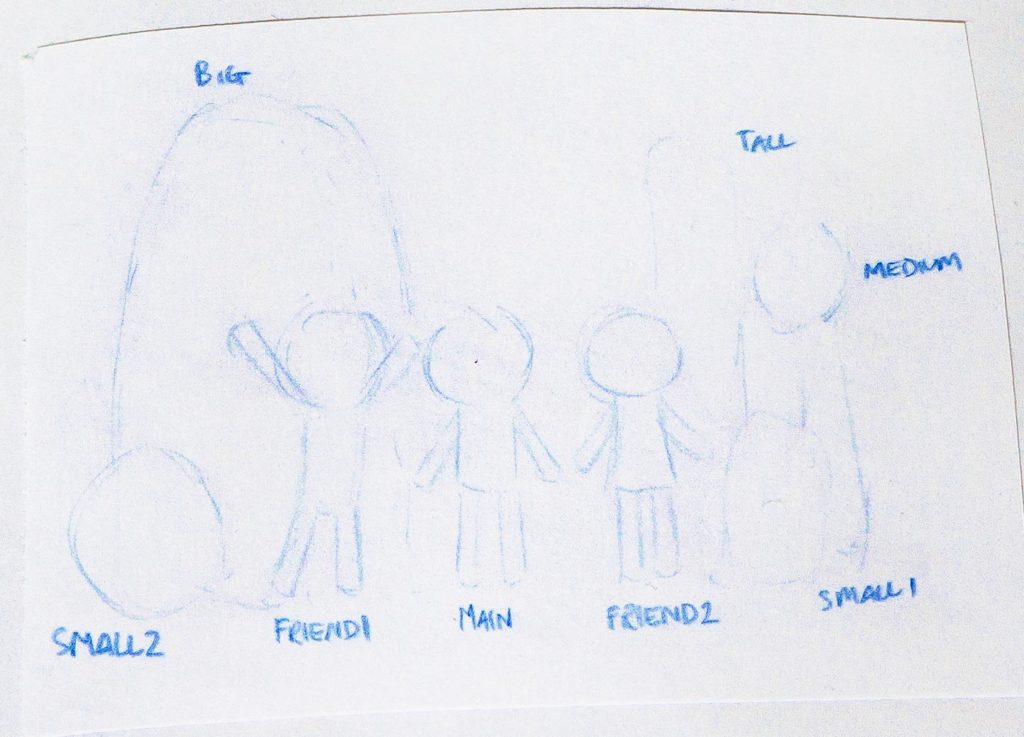 Ensemble Sketch (Sorry for the quality. It was a very light drawing so didn’t photograph well)

I knew the main character was going to be a boy human. A ‘boy’ because, as they say, “write what you know”, and ‘human’ so the main character can be relatable to kids (I realise this wasn’t really necessary seeing as Peppa Pig is the most popular preschool show at the moment, but that’s just what I was thinking at the time). At this stage I didn’t know he was going to live in a rocket house, but I did know he was a human stranded on this alien planet so I wanted his clothing to be kind of spacey/science fiction-y. So I set about designing a human, space-travelling boy. 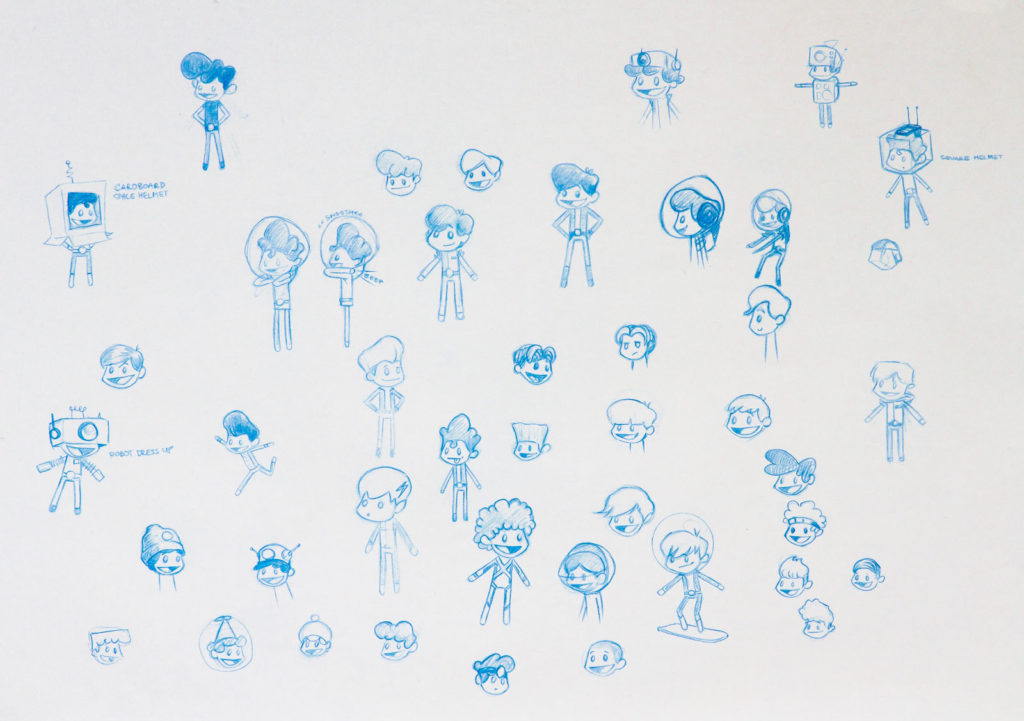 The main defining feature was his hair. I kind of stumbled upon this big, boofy style while trying to find something simple and unique. I had no idea how to translate this into 3D space, but I really liked the design, so I thought I’d worry about the practicality of modelling later.

Next up was the best friend. This character was going to be a boy too because… I don’t know. I have no justification for it other than I suppose I thought a boy would more likely be best friends with another boy. He wasn’t going to be human though. I wanted him to be an alien of some kind. He was going to be cheeky, fun, maybe a little naughty but still loveable, so I wanted a design that would exhibit those qualities. 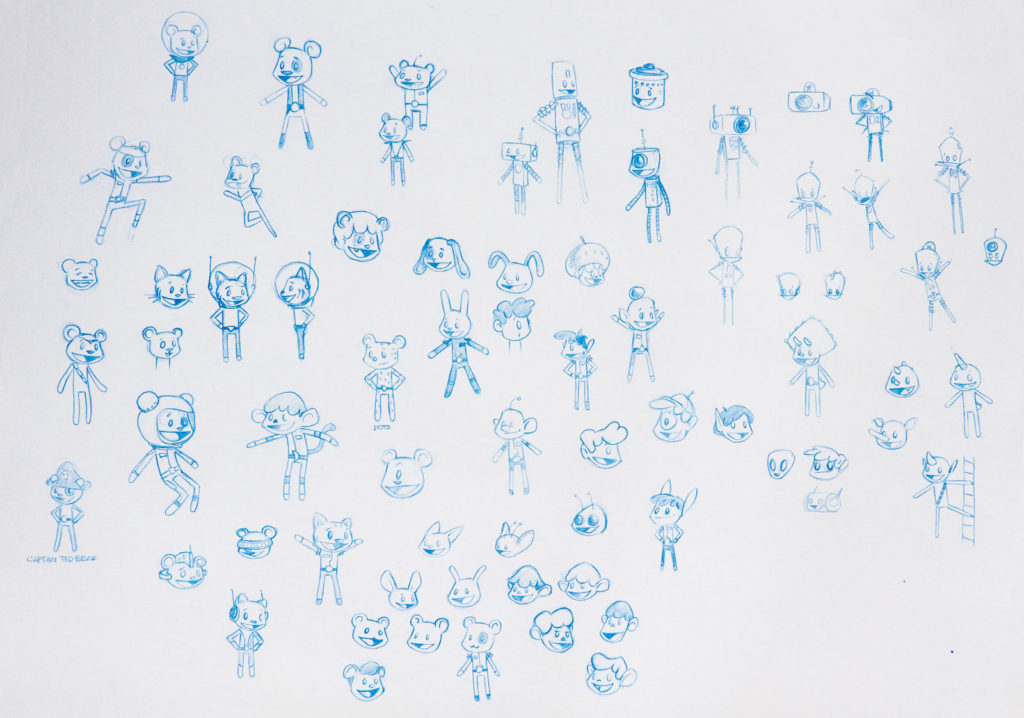 He ended up being an alien teddy bear. I thought that was funny. As you can see I played around with the idea of him being a dinosaur, a robot, and a more alien like being, but I felt those designs didn’t have the cheeky/naughty/lovable features that a teddy bear had. I felt like a teddy bear could get away with doing cheeky things more than a dinosaur or a robot would.

I did a few tests to see if the boy and bear worked together. 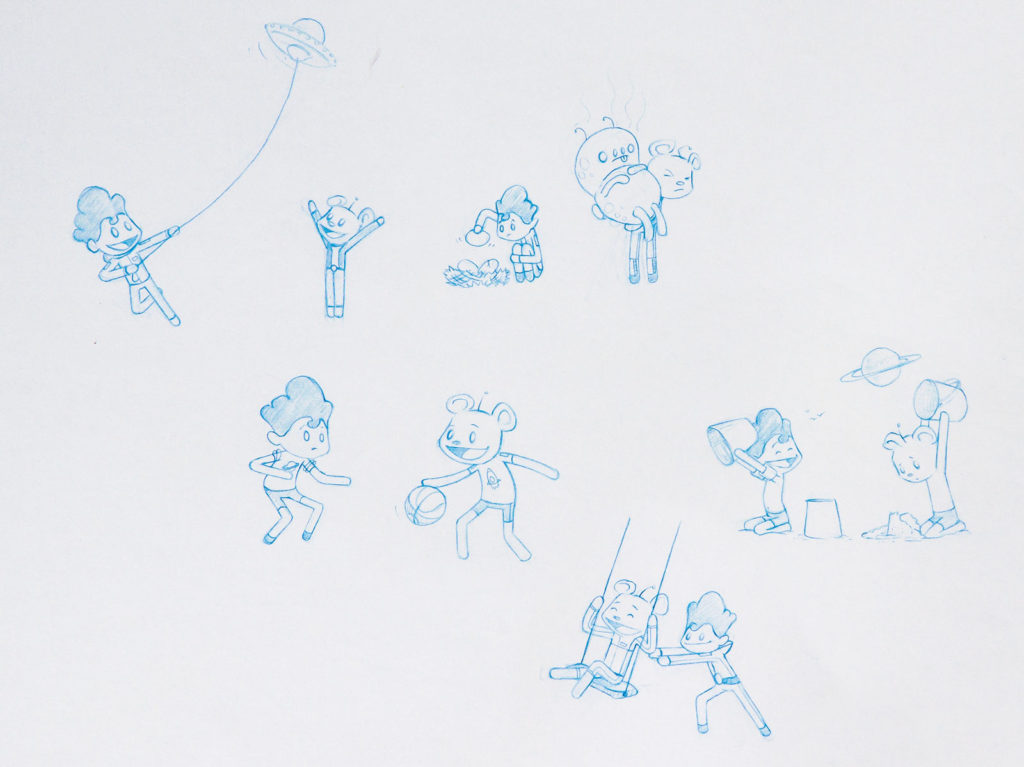 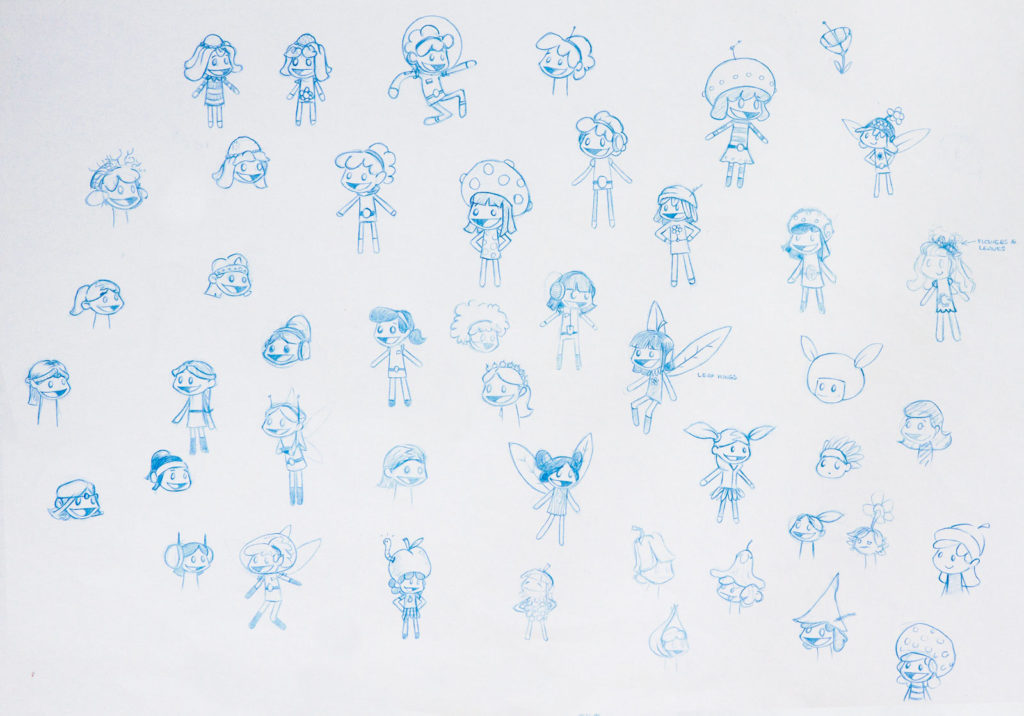 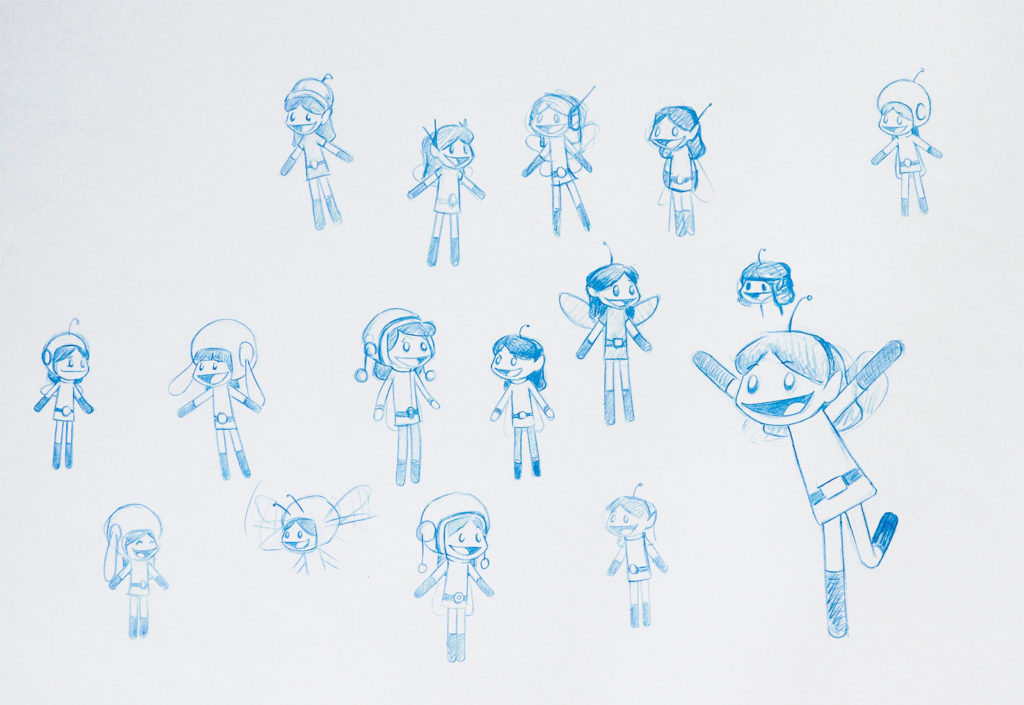 Her design arrived at a kind of ’60s, sci-fi, fairy. We’ll, I hadn’t quite decided between the ’60s fairy or the mushroom-hat girl yet so I drew a bunch of group shots to decide which I liked better. 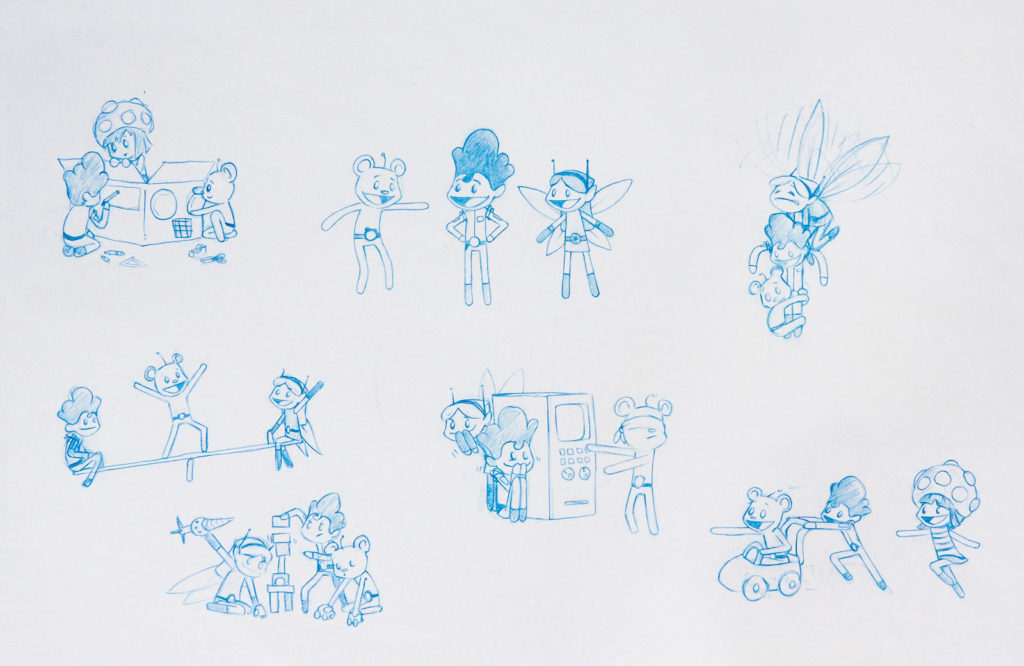 I decided I liked the retro fairy better. Having the ability to fly gives her a cool point of difference and the giant mushroom hat might get in the way too much.

For the next characters I expanded on the robot and dinosaur ideas I had already explored as potential best friends, as well as searched for a monster-esque character. 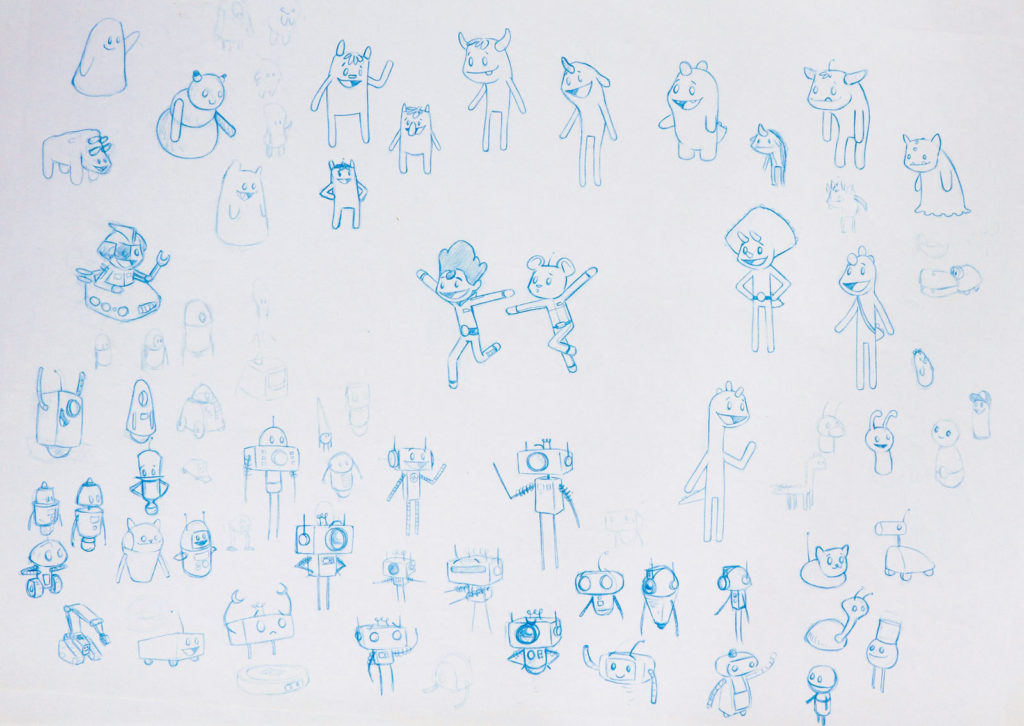 And for the last two characters, I wanted them to have a less humanoid form. Partially for variety but mostly to make them easier to animate. That’s how I ended up with a rolling R2D2-esque, trashcan robot and a legless bunny rabbit. 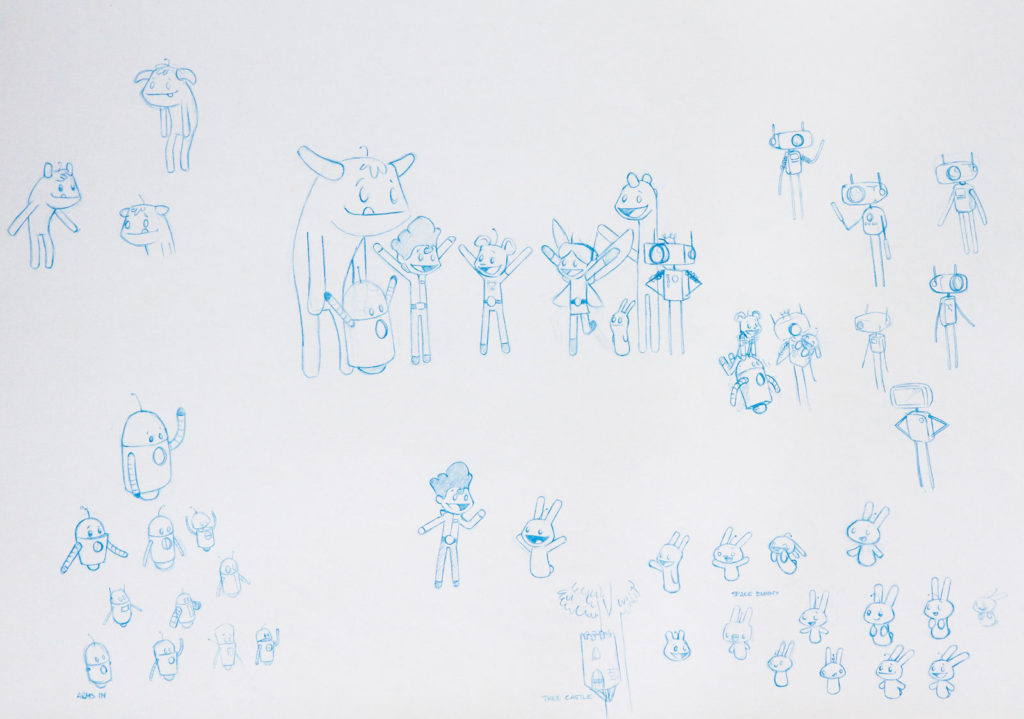 The above image has a few refining sketches for the monster and the humanoid robot, but I hadn’t quite found the dinosaur character yet. Here are a few more concepts for him as well as a bit more exploration for the girl. 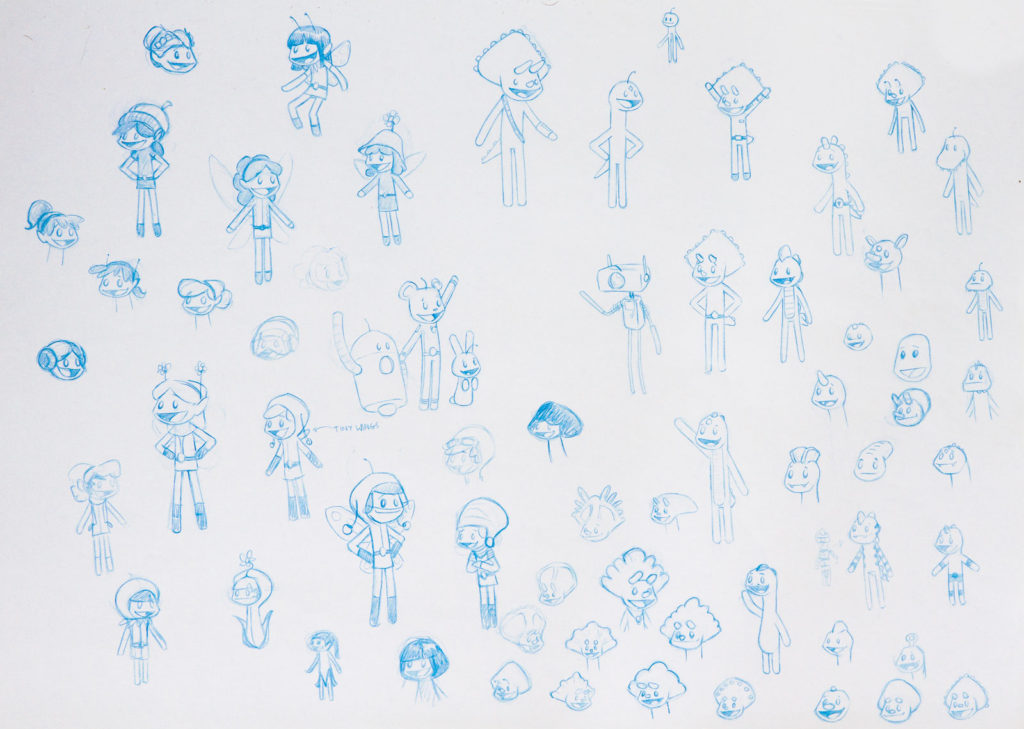 As you can see, you don’t really have to be very good at drawing to design characters for yourself. I am actually a little embarrassed about these pages as they weren’t meant to be seen by anyone apart from me. If I were designing for someone else I’d probably try to be more obvious about the design ideas I was trying to convey. But seeing as it was just for me the pages are rather messy and all over the place.

So, now that I had the character designs, it was time to give them a place to live…