Morgan lives in a Rocket House is a solo project I’ve been working on for the last couple of years now. I’ve always wanted to make my own little show but had never found the time (or motivation) to actually get it started.

Luckily, I found myself unemployed at the end of 2013 after the studio I had been working for closed down. Not really sure what to do next, I decided to take a few months off and just do nothing. Doing nothing for three months was great and made me realise I didn’t really enjoy working on other people’s projects, so I thought now would be a good time to start working on my own. Upon deciding that I should start my own project, I immediately agreed to do some freelance work for somebody else. I made the CG segments for 3 of these commercials…

I never liked the idea of working in advertising, but I will happily make an exception for toy commercials. They are just so silly and dumb; I love them. Not only were these commercials super fun to make, but this was the first project I had done on my own, from animation through to final output, since my university days. It was an insightful experience and gave me the confidence to definitely pursue my own project.

I had no inkling of what my TV show would be about, just that I wanted to make a short-form, preschool, animated series in the style of old stop-motion shows like The Wombles, Postman Pat and especially Pingu. I also knew I wanted to make a small scale show that could be made by a small scale team (i.e., just me). So before coming up with an idea for the show, I came up with ideas on how to make a show with no budget. I wrote down a set of rules that would restrict the scope and design of ideas for the show.

My Self Imposed Restrictions:

With those restrictions in mind, I sat down and tried to write as many loose themes as I could (e.g., space/futuristic, bottom-of-the-garden, prehistoric, fantasy, animals, toys etc). I would then pick a theme, and just fill a sheet with drawings. From a list of around 80-100 themes, I drew up sheets exploring 10 of my favourites. Here are a few examples, showing the themes Space, Bottom of the Garden, Tree Tops and Sky Planets. 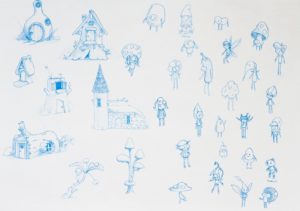 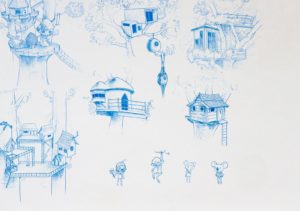 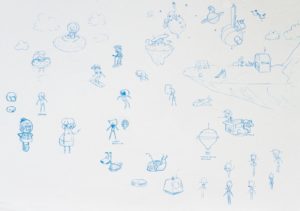 In the end I decided I liked little bits of all the different themes, so I chose a new theme: Alien Planet. That way I could justify having a bunch of disparate looking character all hanging out in the same place. That’s why the show ended up with a human, a couple of robots, a dinosaur, a monster, a bear, a fairy, and a bunny thing.

With a theme and setting decided upon, it was time to come up with the characters. Which I will cover in the next post…